Old Boy Stuart Hayward talks about his life after OBHS.

Stuart returned to OBHS with the New Zealand Theatre Company to talk to our junior English classes.

It’s a strange sensation waiting in the wings of the OBHS auditorium. The nervous tension that comes with stepping on stage long dulled since I last stepped out into the lights back in 2008 during my graduation year’s production of ‘The Sound of Music’. Now a professional actor and performer, what was once a passion for me has become a full time job as I travel Australia and New Zealand with “Shakespeare As You Write It”, a completely improvised Shakespeare show designed to introduce students to the techniques and storytelling elements found in Shakespeare’s work.

It’s somewhat fitting that it was on that same stage that both my passions for Shakespeare and Improvised Theatre took root, having spent countless lunchtimes training with the OBHS Theatre Sports Team and many after school hours working on School Productions such as Shakespeare’s “A Midsummer Night's Dream”.

During 2008, my final year of study at OBHS, I accepted a placement on the Rotary Exchange programme to Grenoble, France. There I continued my high school education at the Lycee Champollion and received my advanced certificate in French from Alliance Francaise. Upon returning to New Zealand in 2010 I continued my language studies at Canterbury University where I sought to complete a linguistics degree. It was during these studies that I rediscovered my passion for performing while completing a theatre performance paper in my first year of study. Whilst I enjoyed my linguistic studies, I found myself being drawn back to the stage and began performing regularly among amateur groups in Christchurch.

Following the tragic events of the 2011 earthquakes I took a gamble, dropped my linguistics studies and auditioned to be accepted into the National Academy of Singing and Dramatic Arts (N.A.S.D.A) where I was later accepted. I spent the following three years studying to become a professional singer, dancer and actor. Whilst studying I also became involved with the World Buskers Festival, Kids Fest, The Cricket World Cup opening ceremony and eventually the NZ kids show “What Now”, working both behind the scenes and on stage. Now a recent N.A.S.D.A graduate and touring with New Zealand Playhouse I’ve found myself back under those familiar stage lights, performing to a new generation of boys in the hopes of sparking that same passion that drew me onto that very stage.

I would also like to take a moment to thank the OBHS tutors and mentors that encouraged my pursuits on that stage. Also a special thanks to Ms Anne Gorman, who over the years has worked tirelessly on countless productions at OBHS. Your encouragement and direction has stuck with me over the years and were instrumental in my early development as a performer. 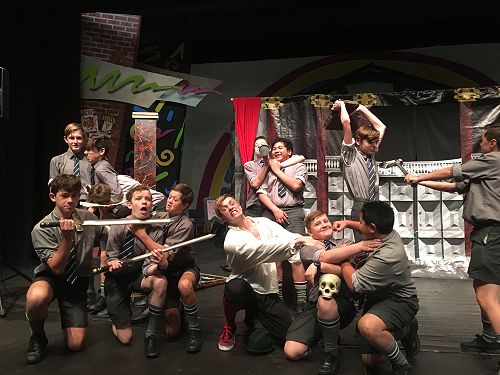