For Invercargill World War II returned serviceman Wattie Thomas, war was just one of those things.

All these years on, it's just something that happened to him.

With a string of medals hanging on his left side, Mr Thomas sat in front of about 180 people at the Rowena Jackson Anzac Day service on Monday.

Six months out from his 100th birthday, Mr Thomas was lively, joking with the staff and residents.

The war is not something he likes to think about, but on Anzac Day it's hard for him not to.

It's a tough day.

This year he recited the Ode to the Fallen at the service.

He was adamant this year would be the last time he will take part in the service, but others disagreed.

Following the service, some of Mr Thomas's fellow residents came up to him, gave him a pat on the hand and told him they looked forward to seeing him speak at next year's service.

As a 22-year-old he was shipped off to Egypt and Syria for four years.

"I never thought I'd see New Zealand again. I didn't know whether I'd come home or not.

But they weren't in battle all the time, he said.

They'd play games, such as cribbage and other times he took leave and visited the Turkish boarder.

He had no family to come back to - his mother died before the war, and his father died while he was in Egypt.

But it was not difficult for him to settle back into normal life at home, he said.

On return he went straight back into his job as the secretary for the Southland Farmers Cooperative Association.

Although, from time to time he had to ask himself some difficult questions, Mr Thomas said.

He often asked himself why he got to go home, but others didn't.

Once, the same question was put to him by a woman on the street whose loved one didn't make it back.

Mr Thomas did not marry before he went off to war, but for those four years he wrote letters to his love.

"She wrote more than I did," he said.

"I had nothing to write."

He later married and had three sons with her.

Mr Thomas is the only living person in Southland to have the RSA Gold Star for exceptional service.

He was a member since the 1950s and president for seven years.

At the same service, well-known Southland soldier Jack Hinton was represented by his cousin Brian Hinton.

He was proudly wearing Jack's original medals on the right side of his chest, medals that took a long time to find.

It was Brian's son Geoff that found many of them on Trade Me.

"It was a four year project," he said.

Geoff's children have miniature versions of the same medals.

The pair were very proud to have Jack Hinton in their family.

About 180 people packed the dining hall at the rest home.

There was not a chest without a red poppy pinned to it.

Many residents laid their poppies on some wreaths as a piper played Lament.

Rowena Jackson village manager Trudy Shepard said it was a wonderful turnout and it seemed to be growing every year. 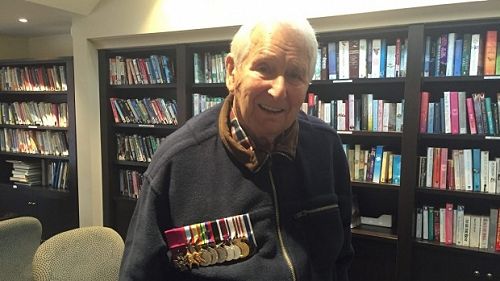