It was hoped that we would have a team of riders around them, with the event being held in Christchurch, but it was not to be. With no team entered, the pair were able to arrive fresh for Sunday and Monday’s races.

James was first to ride in the Under-14 category. He recorded a time of 31 mins 47 secs to finish 22nd in the Road race. The first rider finished in 31.35 in the field of 37 riders. Cole raced shortly after in the competitive Under-15 Road race. There were 64 riders in this category! He completed the Road race in a time of 29 mins 56 secs. Both of the boys came in at the front of the second bunch.

Monday saw the two ride in their respective Points races. This is where riders accumulate points based on their placings across the line each lap. The rider with the most points overall wins. In this race, James finished a respectable 14th. The U-14 winner, Hamish Bowley (St Peter's from Cambridge) incredibly took out every sprint! Cole managed 46th in his U-15 field.

Auckland Grammar took out the overall School competition. Thank you to Justin Gardner for assuming the managers role and to Megan Gibbons for the photos and regular updates. 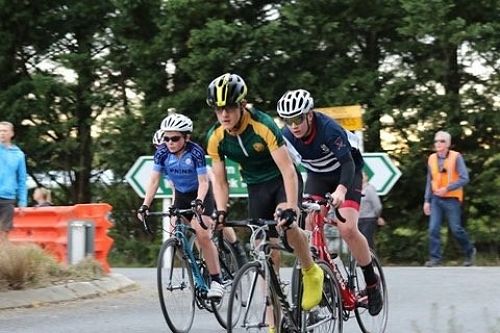