Making his name in the UK

My name is Sam Madden and I have just taken up the position of Choral Scholar for Peterborough Cathedral in the United Kingdom.

Whilst at school I spent my time performing in most of the performance groups such as the choirs, orchestra and in all of the school shows. This helped create a strong desire to continue pursuing music into professional life. Since leaving the school, I have also returned on a number of occasions to perform and also help out with the school shows and choirs.

Peterborough is a city about 80 miles north of London in the UK. It has a population of between 18,0000 and 20,0000 people. The centre piece of the city is the Norman Cathedral which was built between the years of 1118 and 1237. This is where I am currently the Choral Scholar.

In my role as choral scholar I perform at all of the sung services as a member of the Cathedral choir. All of the positions in the choir, including the scholars, are professional roles. Of these, 6 are permanent members of the choir called “Lay Clerks” and the three choral scholars are contracted on a yearly basis. As a result I will be in my position here until the summer holidays of 2019. Over this period I will perform at over 300 services in the cathedral.

It is exciting to be continuing to build my skillset in a fantastic surrounds. Alongside my role at the cathedral I also have the opportunity to build and grow the beginnings of a professional career in the UK. With Peterborough so close to London, outside work from the cathedral is very accessible. I hope that this can be in a range of fields within music such as stage work, solo endeavours and more choral and small group performances.

This move to the UK is for the foreseeable future for me, but I hope one day to be able to move back to New Zealand. The skills I learned in Dunedin and New Zealand have set me up in a wonderful position to continue this journey. I am very excited for the fantastic opportunity to build a career and join the long list of Old Boys' who made their way through music. 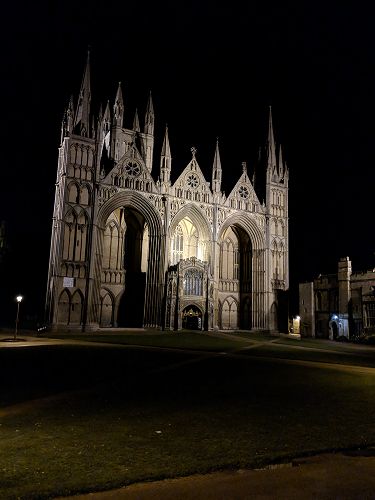