I often start these newsletters by saying we had a ‘quiet weekend’ in the hostel. What this generally means is that we had a few organised events or didn’t have many boys in. Last weekend though, we had a genuinely quiet weekend with most boys wanting to stay indoors and keep warm. If the hostel had a fire then I think most of the boys would have sat around that! The boys are certainly ready for a break this weekend. From a boarding perspective it is fantastic that Friday is a day off school because the boys and staff, really do need an extended break. For those of you who remember the old three term year, this weekend is like the mid-term break.

I am writing this article from my hotel room in Christchurch where I am attending the New Zealand Boarding Schools Association Conference. This is an important event for all boarding schools in New Zealand and is possibly the only time where the various heads of boarding can get together and talk about issues facing them. Yesterday the opening address was from Sir Graham Henry, who spoke about giving young men (boarders and All Blacks) leadership opportunities and how he tried to make sure the All Blacks all had a leadership role, even if they had only played a couple of tests. Sir Graham comes from a teaching background and was the hostel manager at Tibbs House for five years, the boarding hostel at Auckland Grammar School.

After this slightly celebratory address, we were bought back down to reality by Deidre Vercauteren who spoke about New Zealand’s shocking bullying culture in schools. New Zealand has one of the worst rates of school bullying in the OEDC and the worst youth male suicide rate in the OECD. She did however, have many suggestions on how schools can combat bullying, many of which we will look to implement at the hostel. She often mentioned the word ‘banter’ which is a favourite of the boys; “I wasn’t bullying him, it was just banter’’. While it may be banter for someone, it is not always banter for the person receiving it and often at the time they will laugh it off, but it can affect them. I personally think that this is an issue that impacts all boarding hostels. The days of physical bullying are coming to an end, but cyber bullying and ‘banter’ are still present and are issues that the staff at School House take very seriously. Deidre runs a program called KiVa, which means 'kind' in Finnish, and we will look to run this program in School House in 2019. It is the only anti-bullying program in the world that has led to a reduction in bullying and has evidence to support it.

Congratulations to School House boy Cody Thompson who competed in the South Island Regional Competition for Taekwondo on May 12th. He received a Gold medal in the Intermediate up to 62kg Sparring category. Well done Cody!

The hostel 1st XV boys travelled over to Brisbane last Thursday to play the curtain raiser for the Reds vs Highlanders super rugby match at Suncorp stadium. While they lost the game narrowly, a good time was had by all and the boys enjoyed playing rugby on a dry field in warm temperatures, a bit of a difference from a wet and cold Littlebourne!

I hope you all have an enjoyable and restful long weekend. 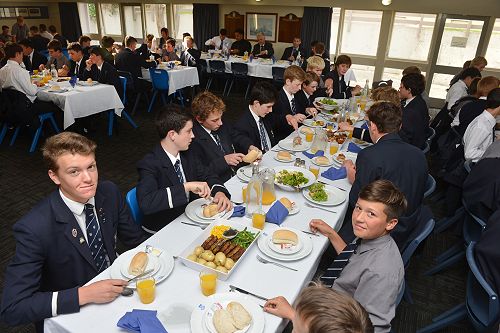