This years iteration of the Otago/Southland Road Cycling Championships was actually held on the road.

Traditionally run at the Teretonga Raceway a double-booking meant the race was moved out to Fairweather Road, a short drive north of Invercargill. On quiet, rural streets it was a fantastic setting for the race. Unfortunately it coincided with a weather bomb that came through dropping temperatures into single digits and bringing plenty of rain with it. Based out of a farmer’s paddock, and with little in the way of shelter around, the cyclists had to make brief appearances from their many vehicles to contest their races and then try to warm back up.

With no juniors interested, and a number of senior cyclists focusing on other up-coming events, OBHS had only two cyclists represent it. Chris MacDonald competed in the Under 17 race. This category had the biggest field and had a high standard of riders. Chris rode well in the 5km Time Trial, placing 7th. In the Road Race later in the day he also managed a 7th placing. This was commendable effort given that many of the others riding had just come off Track nationals and were very fit. Chris also had to overcome the team tactics and physicality that is part of riding against teams from the Southland Schools.

In the Under 19s, Pablo Paulsen surprised himself (and some of his more fancied competitors) to be sitting in 3rd after the 7.5km Time Trial. Riding strongly in recent local racing, Pablo knew if he could stay with the lead group he was a chance of staying on the podium. He was able to do just that. Unfortunately he probably opened up his sprint too early, which may have cost him a win. He was able to cross the line 4th on the back of the lead group though which meant his time differential was negligible and he was able to take the bronze. The congratulations from his fellow competitors showed the class with which he rode. 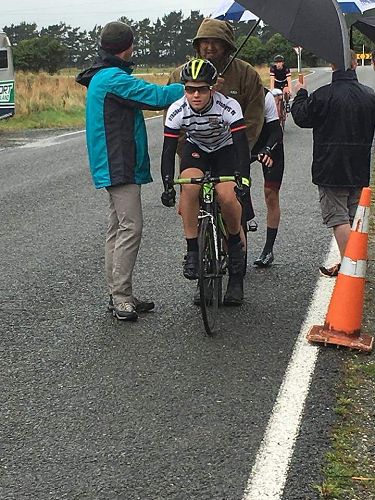 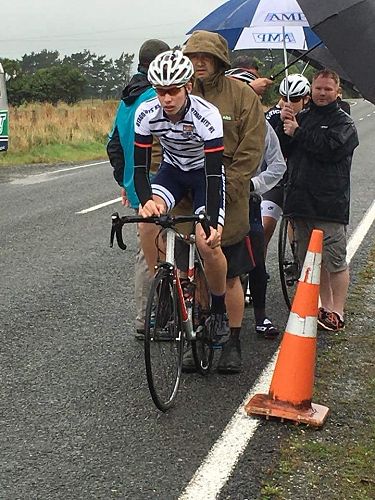