School rowers travelled to Twizel and Lake Ruataniwha last Thursday (January 28th) and had a training row before settling into their luxury accommodation in the camping ground. There was a light row on Friday before full on competition Saturday and Sunday in the South Island Club Championships.

Two kilometre races! Lucky they were well fed by the camp “Mums” from the facilities of “Kate’s Kitchen” and the OBHS Rowing Tent on the new concrete pad (thank you Tony Higgins and team). Royce Wilson, Scott Bezett, Grant Bezett and Pete Sinclair making sure the boats were well set up in the boat park before taking to the water.

Of note the U19 Coxed 8 including Luke Hurdle (cox), Club Captains Ben Sinnamon and Aaron Roydhouse and former OBHS rowers Scott Bezett and Corey Lewis received a silver medal. A very close and exciting finish as they were within 2 seconds of gold. 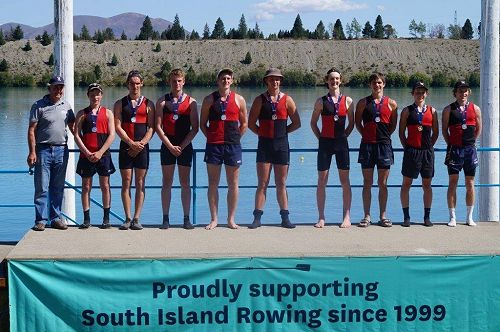