The following are some student reflections on the 10H Camp to the Matukituki Valley that happened 14-19 March.

On the 14th March, 10H went camping at Mt Aspiring.

Ten minutes into the journey we had been christened “The Dream Team.” There was a general air of excitement as we boarded the bus at seven am on Sunday morning. Most of the first day was taken up by the travel, then carrying the supplies to the Lodge. After this gruelling task was complete, we were given a tour of the Lodge and assigned our chores. We learned the true value of teamwork in carrying the food across the creek.

After eating a delectable dinner, we were served a somewhat controversial “custard flavoured drink” (i.e custard that had not set). After that, we were allowed an hour of free time before bed. This was spent on the table tennis table where a game of “Ping pong” was commenced. The best part of an hour later we realized we had ten minutes to be in bed. Therefore a mad panic ensued, with a stampede to get ready for bed.

Once in bed, it was found exceedingly hard to sleep, hence why most of the boys resorted to talking for a further couple of hours.

We were greeted early on Monday morning by a misty scene as rain set in for the day, but this didn’t put a stop to our enthusiasm.

After a big breakfast, we spent the morning playing games and getting our shoes soaked down at the quickly rising creek. Then we were thankfully warmed up by some exquisite steaming noodle soup.

After these interesting activities, the afternoon was filled up as we played off for ‘The Big Wet Matukituki Challenge’, which consisted of games of Bowls, Ping Pong, Finger Snooker, Checkers and Uno. Congrats to Team One, who took the victory and won the bag of marshmallows!

As the day went on, the rain began to clear so we went on a history walk around the Lodge and surrounding areas. We learned to make the most of the wet conditions and keep our spirits high.

After a filling breakfast of porridge and other delights, we were set to the task of getting ready for the overnight tramp. This consisted of lightening our packs, only to make them heavier with tents, food and cooking supplies.

After applying copious amounts of sunscreen, we set off on a staggered start in our cabin groups. Shortly thereafter, yours truly took an unexpected swim in McPherson’s creek after a misplaced step on a plank. Unfettered, I picked myself up and carried on. Thus followed a jovial atmosphere in our small groups for a few kilometres as we left the West Branch heading for the East Branch of the Matukituki River.

The whole group met up for a long stretch through a field. At the end of the field, we continued through a forest and up to a high flying swing bridge. Shortly after crossing it, we arrived at our campsite to find that we had been beaten there by a Dunstan High School. Not to be deterred though, we shared the site.

We split into two groups, in which we made our own campfires. After cooking a dinner of pasta, noodles and risotto, we were ready for our instant dessert which had been prepared earlier. However, we were dismayed (were we though?), to find that it had not yet set.

We then retired to sit by our fires and talked into the night. After a restless night's sleep, we awoke to the beautiful scenery, and startling cold. Wanting warmth, we set about trying to revive our fire, which remained fruitless until we were gifted matches.

By this time, most of the camp had risen, and Emerson had begun cooking up a ‘mean feed’ for his group. This consisted of a badly cooked pancake and toast. We then set off for a short walk to look at Avalanche Glacier, and then head to a frigid waterfall where some chose to shower.

After arriving back at camp, we shouldered our packs for the return journey to the Lodge. The journey back was much the same as getting there, except for nearly getting stampeded by cattle (thank you Ethan), we made a turn to cross the Matukituki before heading to Wishbone Falls for a swim.

One of the highlights of the camp was the kayaking on Thursday. One group got up bright and early, sacrificing their hot breakfast, to go upstream and spend a couple of hours riding the rapids and tipping over in the frigid Matukituki River. As the day went on, more and more groups got to experience kayaking through the rapids.

Another highlight of that day was the “The Great Matukituki Dam Off”, where cabin groups would compete to build the best dam in the creek. A points system was devised and was backed up by an exhaustive list of judging criteria.

After a long day of kayaking and dam building the results of the dam competition were accounted for and Group 4 managed to build the best dam and claim the prize which was a pack of marshmallows.

The camp experience is a once in a lifetime experience for our students at OBHS and an absolute privilege for us as staff to run.

We would like to think that throughout their time at the Lodge, our young men are pushed to work together as a group, learning to help each other in the tough times as well as enjoying the good times. Throughout night time activities and following the camp the class has been instructed to reflect on what they have learnt about themselves, each other and what it means to be an OBHS man.

A common theme expressed by the lads was the importance of being resilient; that is to find ways to bounce back to normality and positivity after making mistakes, being grumpy with each other or being uncomfortable in the challenging NZ back county environment. This is both an individual mental challenge for some but also a group imperative as we as a collective are stronger when those who are struggling are helped out, taken care of and brought back into the fold.

For us as teachers, it is genuinely inspiring to watch young men work through this and realise the value and strength of every member of the group. This is brotherhood!!!

I would like to thank the amazing teachers that volunteered their time and brought their passion to this experience. To Mrs Kate Hope, Miss Emma Moore and Mr Jens Moller, thank you for your leadership with our lads and support of each other. They were the dream team. A pack of legends!!! I’m sure that our young men and their families appreciate the sacrifice you make to spend time away from your own families and classes.

Finally, I would like to acknowledge the passion of our senior students who volunteered their week to ensure the Year 10s had a wonderful time. Thank you to Jack Kennelly, Hunter Hewson, Thomas Pope, LeBron Laiman and Tame Perenara. They were a fantastic team of young men who consistently lead with respect and honour. 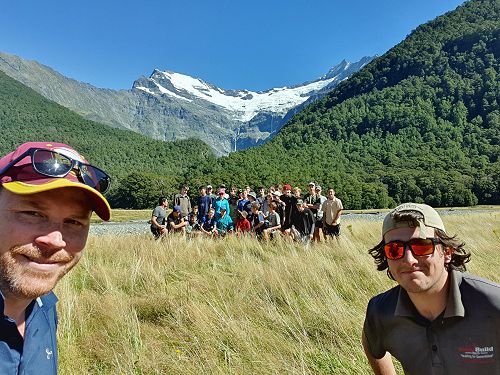