No audience, but plenty to cheer about!

Covid-19 has caused disruption to the lives of everyone throughout the country. Limited access to facilities for training has affected almost all sporting codes, teams and individual athletes. For divers, limited pool time, access to diving boards and reduced training hours for weeks at a time can seriously interrupt months of work to gain and retain new and difficult dives.

The Diving Ōtākou South Island Diving Championship was set to become yet another casualty of Covid-19, when at the last minute, Moana Pool permitted the competition to go ahead, under strict Health and Safety guidelines that did not permit spectators. However, casual swimmers and aqua-joggers were entertained with some spectacular diving - particularly from two Year 11 OBHS boys whose hard work and perseverance in challenging circumstances paid off.

Theo Smith had a clean sweep of the gold medals in all Boys A age-group and Open Men's 1m, 3m and platform events and was awarded the W. H William's Memorial Cup, the Kirkley Challenge Cup, NZ Men's NZASA Cup as well as the Landers Tower Cup for the highest platform score. Theo also claimed gold in the Open Mixed Synchro 3m event with Sophie Derybshire (Year 9 at Columba College). Theo was the first Dunedin diver to compete a full 10m list since his coach Aimee Megget back in 2002.

Rohan Leckie-Zaharic also had a very successful competition, collecting all silver medals in the Boys A age-group 1m, 3m and platform events, as well as the Open Men's 1m and 3m events. Rohan achieved his highest scores of the competition on a double somersault dive from the 1m and an inward dive on the 3m. He also completed an impressive dive from a handstand position on the 5m platform. 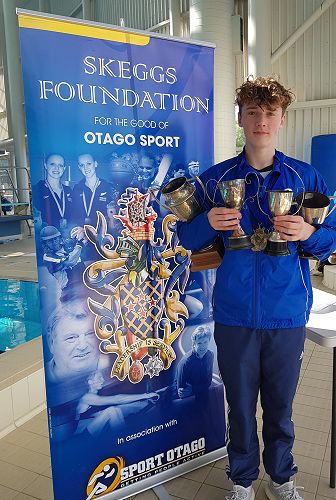