The season is over already, a whirl-wind three weeks of double-headers!

This time Otago Boys’ High School was represented by five teams, across three divisions, and on the final night two of the teams were positioned to win their grade.

In division one the Futsal 1sts, who have struggled for consistency in this competition, produced a nearly flawless season. Defeating former winners, Bayfield High School in both their encounters set up their overall win. Unfortunately, in the last game they lost to Logan Park, already knowing that they had the title. Morry Moriyama was outstanding and together with the core of Angus Brett, Saeed Omidwar and Jacob Roberts, they were too good for their opposition all season. A special mention must go to stand-in goal keepers, Ollie Bixley and Ethan Lau, who kept frustrating shooters.

In division three the Senior Whites managed one better, going undefeated. The largest of the divisions, with six teams, they amassed 36 goals across 6 games. In the final game of the season they met Taieri College who finished in second place. They produced an excellent performance, winning the game 7-3 to seal their dominance.

Thank you to all the players who have had to make their own way to games, often racing from examinations to represent the School. A fantastic haul of silverware that hopefully can be defended next season. 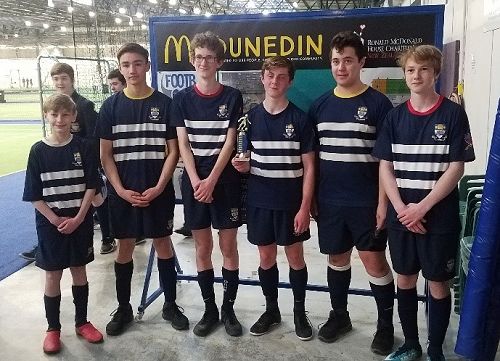